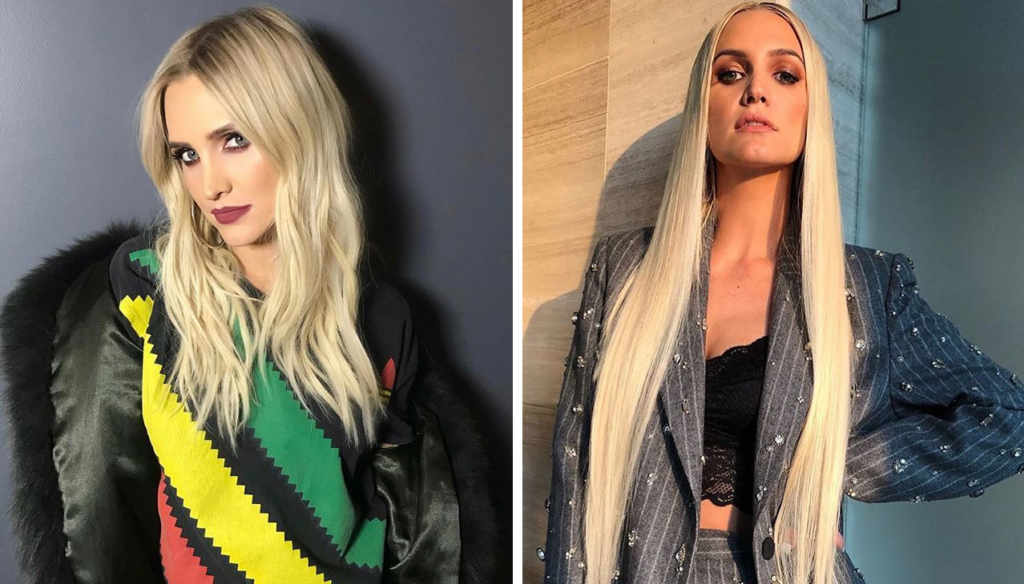 Divorced at: 26
On May 17, 2008, Pete Wentz, the bassist of Fall Out Boy and Ashlee Simpson (she’s a singer) became a husband and a wife. They exchanged vows in the presence of 150 guests gathered at the bride's parents' home in Los Angeles. Ashlee's older sister Jessica was a bride’s witness. Pete's bulldog named Hemingway held the rings.
Ashlee decided to organize a marriage in the style of "Alice in Wonderland". And finally, the most important thing – the star girl was pregnant. This was the first marriage for Pete and Ashlee, who began dating in the fall of 2006.
On Tuesday, February 8, 2011, Ashlee Simpson filed for divorce in the Superior Court of Los Angeles, and in the column, about the reason, she indicated the standard wording “insurmountable differences”. The singer asked the court to establish joint custody of their son Bronx (born November 20, 2008). Thus, the marriage of Ashlee and Pete ended after … two and a half years.

Divorced at: 26
On July 5, 2006, the famous Canadian pop-punk singer Avril Lavigne became the wife of her “colleague”, the lead singer of Sum 41, Deryck Whibley. Despite the extravagant image of young lovers, their wedding became a real embodiment of a refined and classic celebration.
Few could imagine that such an original couple would follow the traditions of their ancestors during their triumph. After three years of living together, Avril Lavigne and Deryck Whibley thought they had had enough. There had been some problems in the family of young musicians and one day it was officially confirmed. According to the data, Avril made this decision because she wanted to move on.
Divorce papers were filed within a few days after the big news. Representatives of the spouses tried to refrain from any comments. “Deryck and I are diverging and moving to a new life on a positive note. Thanks to all my family, friends and fans for their support,” Lavigne wrote on her blog. 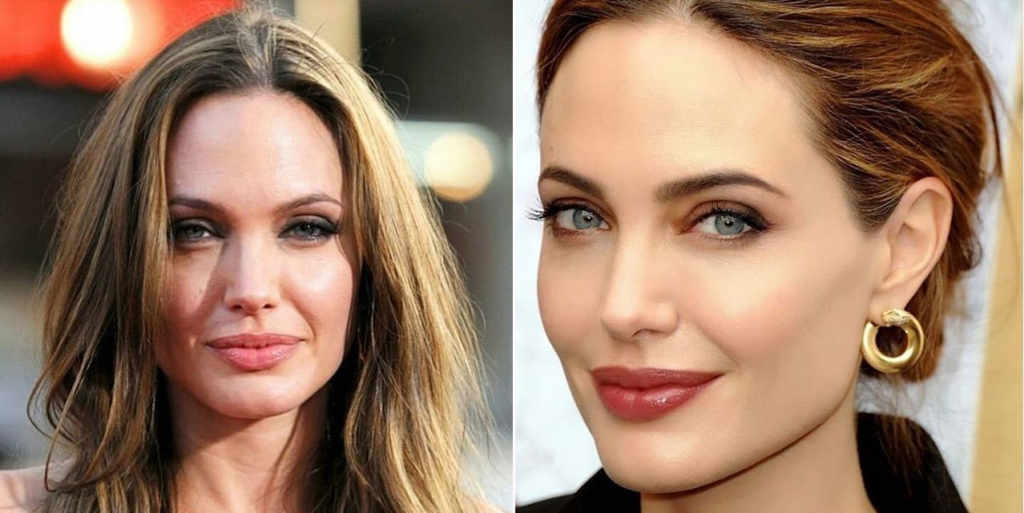 Divorced at: 24
Brad Pitt wasn’t Angelina Jolie’s first husband. Once it was Jonny Lee Miller, an actor. They met when she was still a little-known actress. Johnny Lee Miller was also just starting his successful career.
Young actors were shot in the film “Hackers” – this picture not only glorified them, but also connected them first with romantic bonds, and then with the bonds of marriage. Angelina Jolie and Jonny Lee Miller began dating in 1995, two years later they got married.
The marriage ceremony was modest but very interesting. Newlyweds pricked their fingers and shared drops of blood, touching each other. The bride came to the wedding in leather pants and a T-shirt, which, by the way, also had a bloody inscription with the name of the future spouse.
Marital life lasted about a year. Jonny Lee Miller and Angelina Jolie officially divorced in 1999, although they diverged much earlier. They explained the gap by not being ready for a serious relationship. 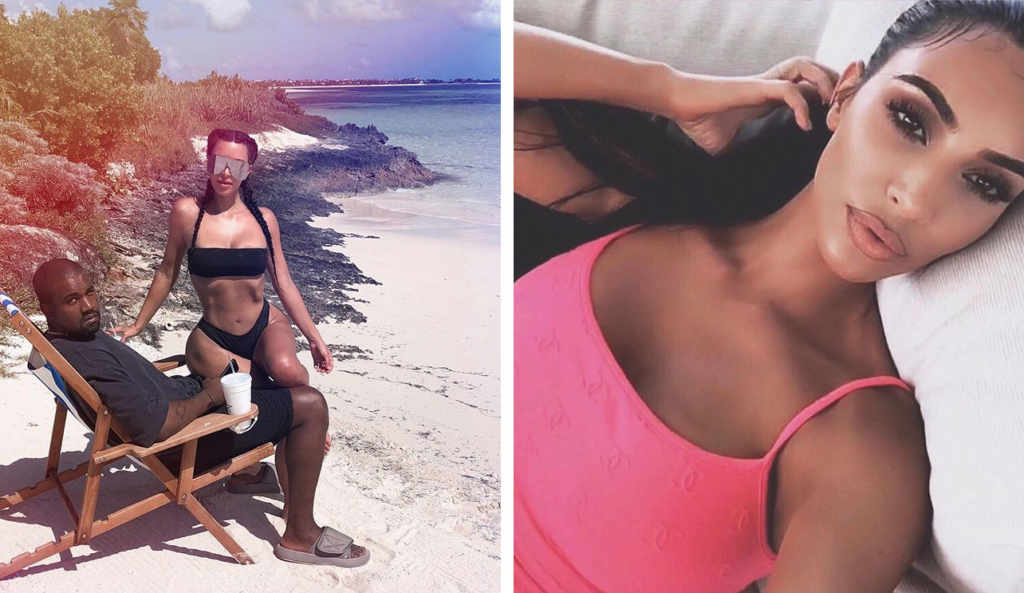 Divorced at: 24
Now 38-year-old Kim Kardashian is the impersonation of a successful American woman. She keeps several business projects and is considered to be one of the richest representatives of the Kardashian family. For 4 years, Kim has been married to rapper Kanye West and has three children: daughters North and Chicago and Saint, a charming son.
Kim had to go a long way to happy family life because her first husband was a tyrant. In 2000, 19-year-old Kim married television producer Damon Thomas. Thomas beat his wife and, under the fear of reprisals against her relatives, forbade Kim to talk about battery with her family. Damon wanted complete obedience. He told Kim what to wear, where to go and how to choose friends. Kim did not dare to go out without his permission. After three years of hell, Kardashian decided to flee and file for divorce. 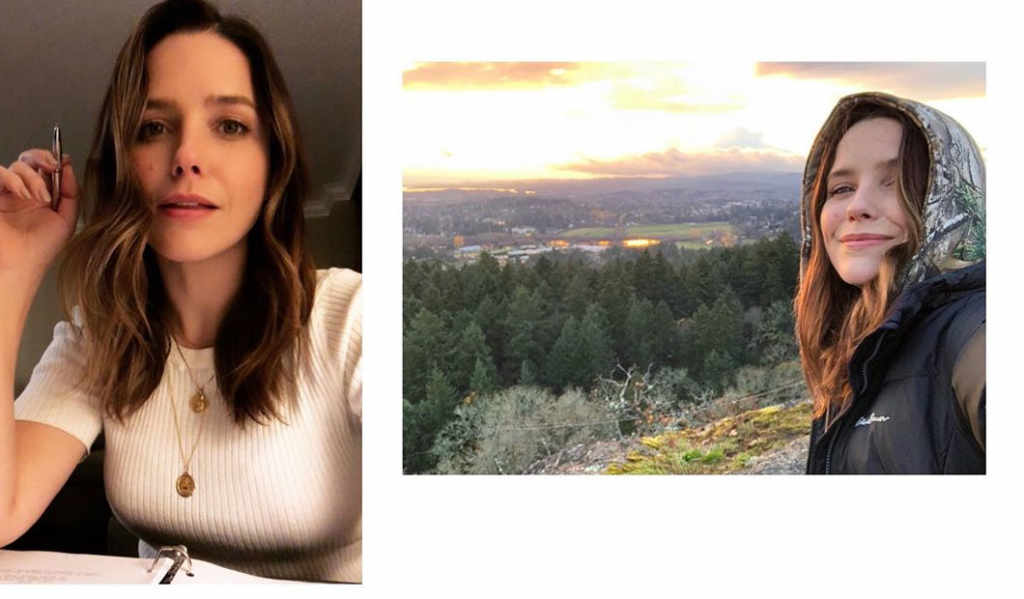 Divorced at: 23
Sophia Bush and Chad Michael Murray. The stars of “One Tree Hill” were a couple in the series and a romance spun on the set between them. Soon, Chad and Sophia got married, but after five months they filed for divorce. The reason they officially announced was "inconsistency of characters."
It was rumored that the cause of the divorce was Chad’s betrayal. They say he cheated on Sophia with Paris Hilton, his partner in the film “House of Wax”. Now the actress is convinced: not every love is destined to last forever. Once she told: “In my 20s when I started my career, I was not looking for a serious relationship. Until the age of 30, I didn’t plan at all to burden it with anything or anyone.”
According to Bush, after parting with Murray, in order to avoid public interrogation, she hid her pain for ten years. After the divorce, the actress began to perceive the relationship in a completely different way: “There are feelings that should heal you”. 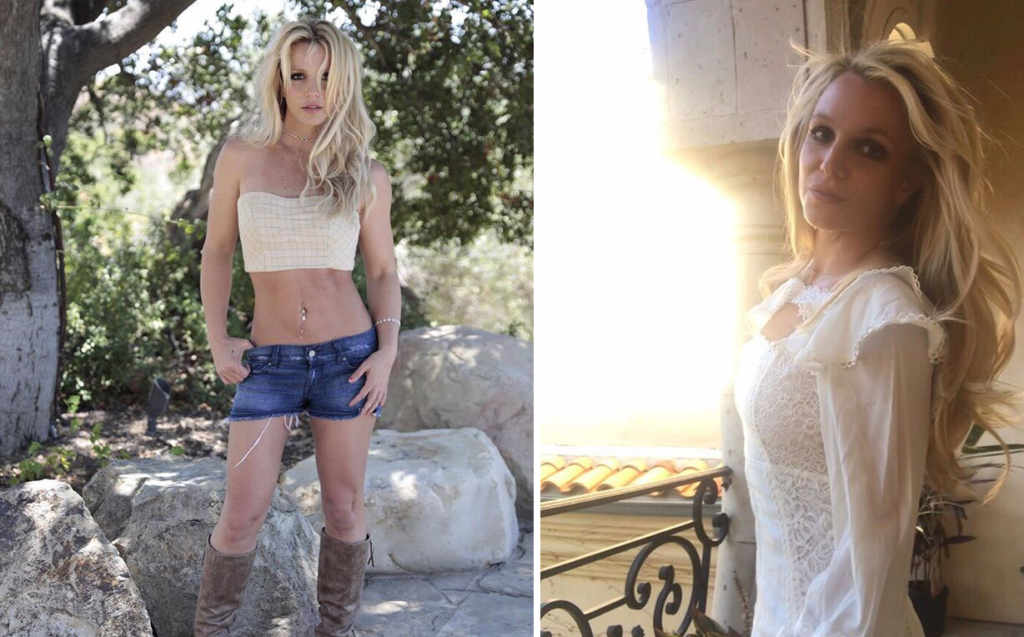 Divorced at: 22
Now Britney is a loving mother of two sons but in her youth, she was a real hothead One day in Las Vegas she rashly said "yes" to her school friend. “That city has turned my head!” – the pop princess explained her unplanned appearance at the altar while her lawyer was bothering about the annulment of the marriage.
The meticulous journalists dug up that Britney Spears’ ex-husband, Jason Alexander has an impressive amount of conflict with the law. As for the marriage ceremony itself, we recall that it took place in a Little White Chapel – one of the wedding chapels located on Las Vegas Strip.
The wedding was preceded by a night that Spears and Alexander had been spending at the club. And by the time of marriage, the bride was already thoroughly drunk. Spears and Alexander were of the same age. According to and eyewitnesses, the ceremony was surprisingly modest: the bride was wearing jeans and a baseball cap. 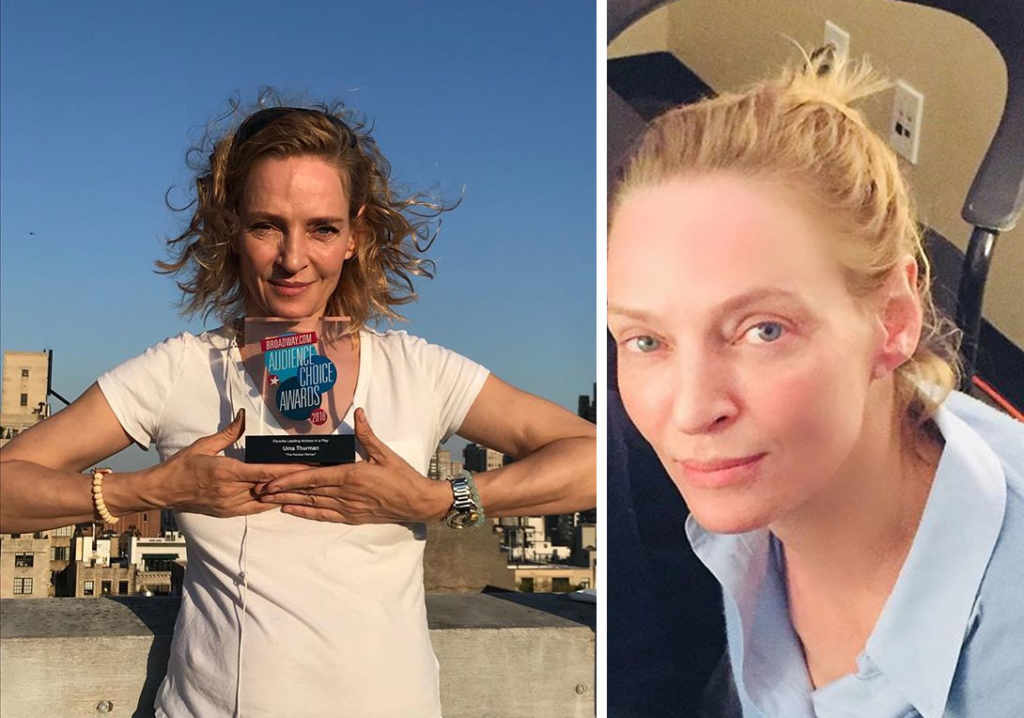 Divorced at: 22
Uma Thurman was born in a rather unusual family – for example, her father, Robert Thurman was the first American to become a Buddhist monk, and Dalai Lama himself tonsured it. Her mother is a former hippie. Therefore, since childhood, Uma was an unusual girl.
Her first love – not the prince of a fairy tale, but the "bad guy" Gary Oldman. Twelve years older than Uma (she was only 20) – he had been already married and was addicted to alcohol and drugs. Gary attended parties, used everything that came to hand, debauched and got problems with the police.
Uma tried to put up with everything. She cooked him diet food because the actor had problems with his stomach and forgave his rudeness.  In the end, she realized that her first big love is good on the screen, but not in life. Oldman was a completely unbearable man. Uma packed up and left. And in an interview, Gary explained the reasons for their divorce by saying that he “could not live with an angel”. 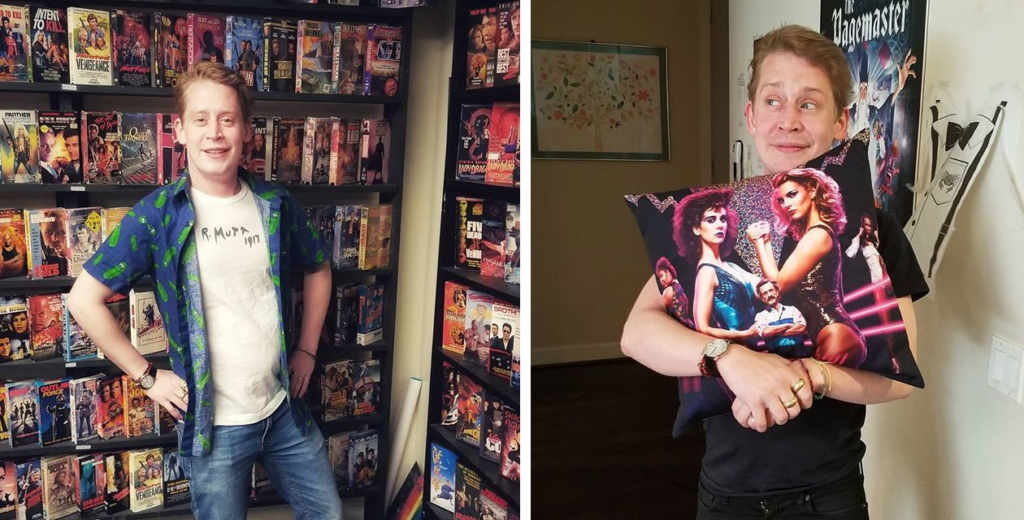 Divorced at: 22
Macaulay Culkin, world-famous for his role as a mischievous boy in the movie “Home Alone”, was far from being an angel in his teens. After such successful films and acting debut, Mac decided to start a film career and thoroughly study and arrange his personal life.
Mac seriously became interested in literature, began to study philosophy and ancient history. In June 1998 (when he was 17), he got married to Rachel Miner. She was also an actress but played small roles and starred in TV shows. All around it was said that Rachel Miner and Macaulay Culkin would not be able to live long together.
For the entire Hollywood elite, their marriage was simply doomed to failure, because, like two star teenagers, they would not be able to establish family life, and the public was right. After two years of family life, the young lovers decided to part, and they officially decided to divorce two years later. 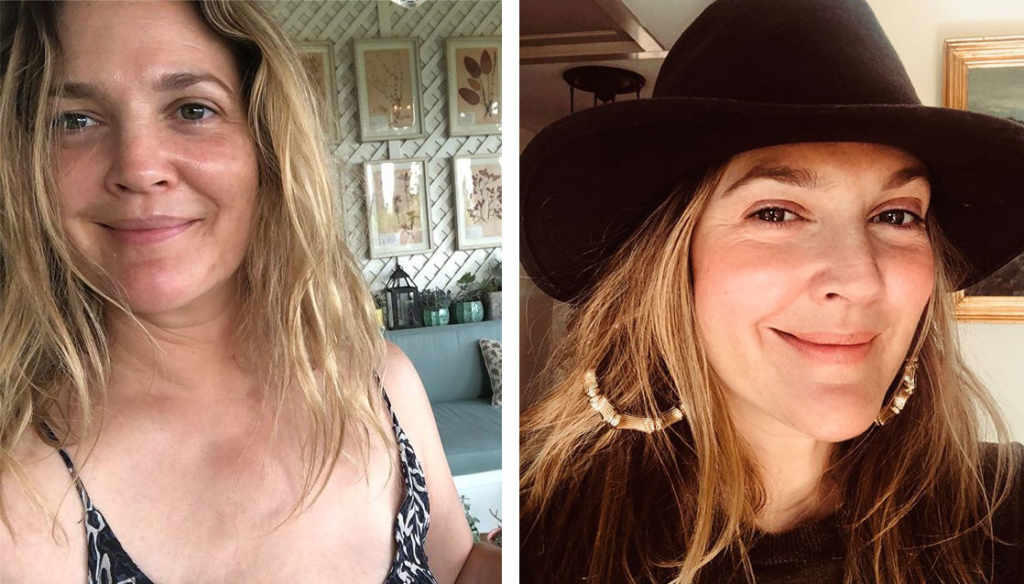 Divorced at: 20
Drew Barrymore entered adult life quite early. Her pretty face began to flicker on television when the little girl was a couple of months old. However, the real fame fell on Drew when she was six years old. It was the day when Steven Spielberg's “E. T. Extraterestrul” came out.
We cannot call her an obedient child: the girl tried to smoke at nine, alcohol – at eleven, she got addicted to marijuana at twelve, and first experimented cocaine at thirteen. At the age of fourteen, Drew was in a rehabilitation center. Is it too much for a teenager?
Her first marriage happened in 1994 when the girl was only 19 years old. Jeremy Thomas, a sailor, and bartender popped the question. Drew immediately agreed and literally ran away with her young husband. True, she returned home in six weeks.
Apparently, family life with a sailor opened her eyes. The union of two souls did not last long: two months later Drew filed for divorce. 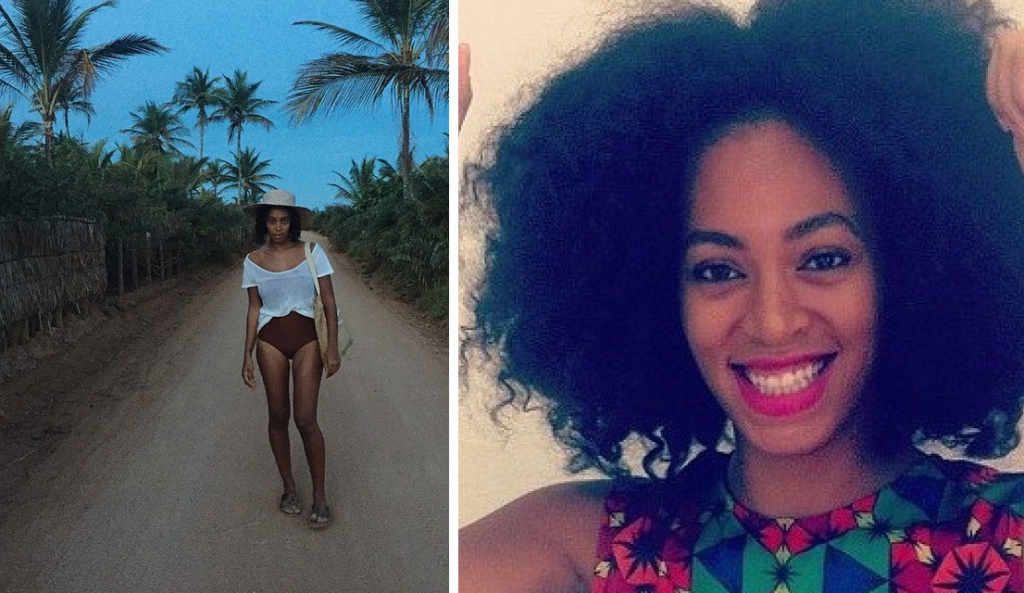 Divorced at: 20
Beyoncé’s younger sister and singer Solange got married and gave birth to her first child at seventeen. Her dearie was an outstanding football player Daniel Smith. The couple moved to … Moscow, Idaho. They were too young, and Idaho was too far from the epicenter of musical life. The marriage broke up within three years. Knowles has repeatedly noted that she considers her son “the greatest blessing,” but still regrets that she became a mom so early.
However, it was her son who helped her to cope with a painful break. “I was completely lost. My son Julez was the only joy, I devoted myself to him – Solange recalls. After the divorce, the singer and her son moved to Los Angeles, California, where they arranged their new home.